Franz de Byl founded his first hard rock and R&B band at the tender age of 15 in Bottrop, when they mostly played Jimi Hendrix and went wild at the concerts. 40 years later and somewhat wiser, they have not gotten any quieter.

They performed at the Berlin Marathon as the “Jack Daniels Band” for as long as they can remember. Since 2009, they have been known as “The Goons”.

Franz de Byl: “One special experience is runners stop and take a break with us to get down and dance—like the spectators on the KuDamm boulevard do too. It is crazy at our stage. When the weather is nice it is especially fun!” 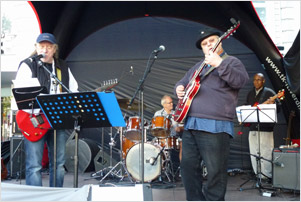