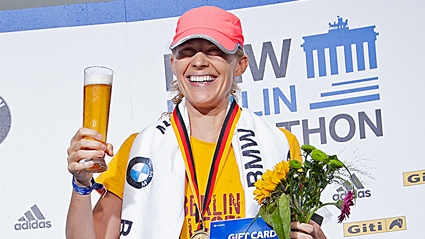 © SCC EVENTS - Ali Candall from Canada is the illionth finisher

Günter Halla was the very first finisher of the BERLIN-MARATHON on October 13, 1974. Ali Crandall from Canada (Toronto) was the millionth finisher with a time of 3:55:16 hours at the 46th BMW BERLIN MARATHON on September 29, 2019 at 14:07:33. In between them there were 999,998 lucky medal winners (109,660 skaters, 4,811 wheelchair athletes & hand bikers, and 885,527 runners), each with their own dramatic or not so dramatic stories. The total distance covered is about 42 million kilometres, which is about 55 times the distance from the Earth to the Moon and back.

In the early years, the finish was recorded manually by block and pencil. At the premiere of the BERLIN-MARATHON at Mommsen Stadium with its 244 finishers, this was easily possible. This year, with 46,983 participants, there were more runners than ever before at the start on the Straße des 17. Juni.  Tracking the one millionth runner among the total finishers was only possible through many calculations in advance as well by using the most modern equipment on site. But not only the technology has changed over  the course of the event's history. Originally in the district of Berlin-Charlottenburg, the start-finish area moved to its present location between the Brandenburg Gate and the Victory Column.

This was only possible due to the fall of the Berlin Wall 30 years ago, when Berlin became a free city again. The history of the BERLIN MARATHON is part of Berlin’s history and the one millionth finisher now plays his very own role in it. Ali Crandall you are a #berlinlegend now!

The Canadian does not have to worry about starting her BMW BERLIN-MARATHON 2020. All others who are interested in a starting place at the BMW BERLIN MARATHON 2020 can register from October 1st (for more information visit: www.berlin-marathon.com) Furthermore, Ali received a freestyle in addition to a special medal Place from the hands of the managing directors of SCC EVENTS Christian Jost and Jürgen Lock. In addition, she was pleased with a set of new tires of the main sponsor Giti Tire and a Polar sports watch Vantage V.