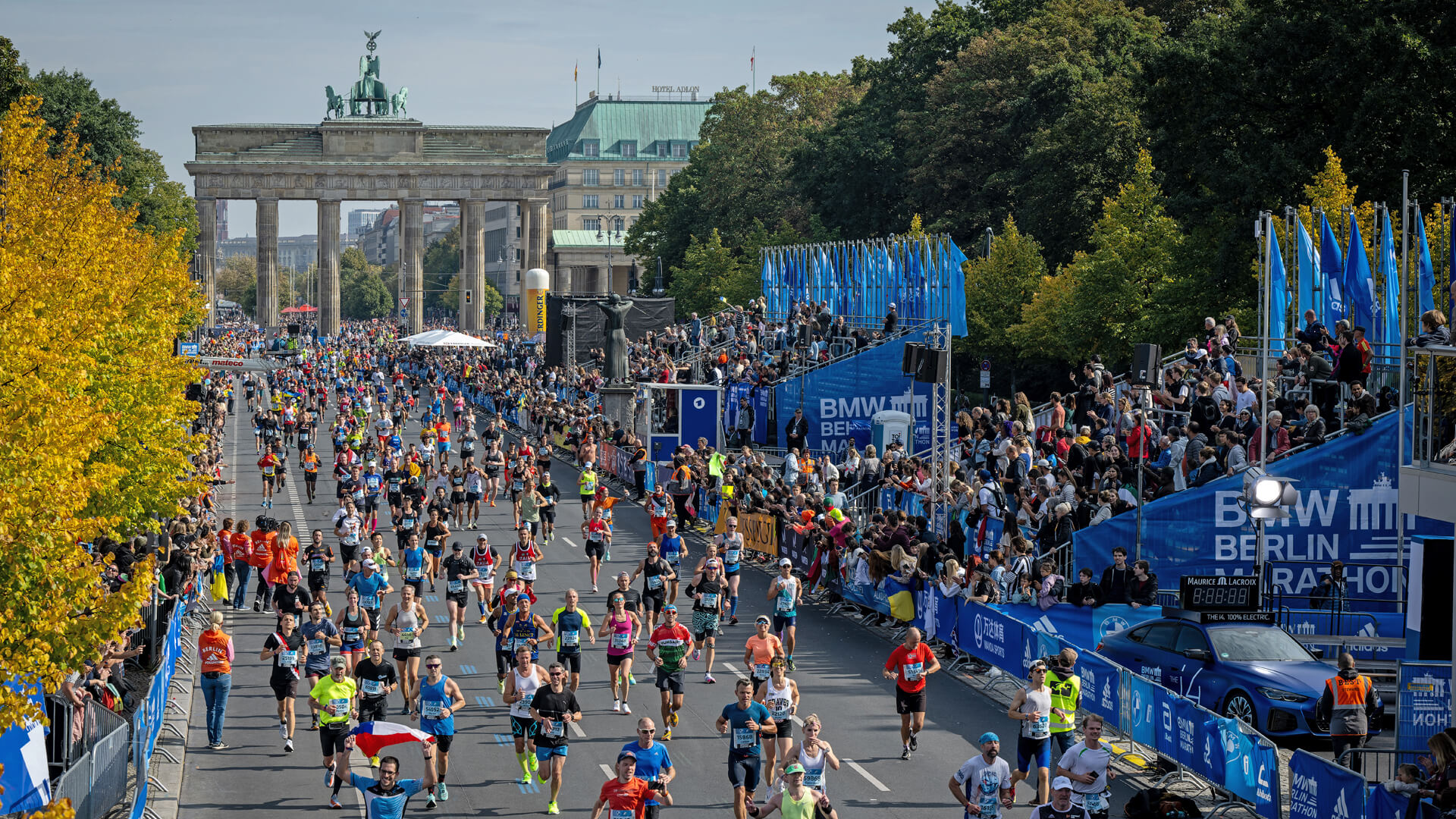 © ©Camera4_Tilo Wiedensohler / SCC EVENTS | Shortly behind the Brandenburg Gate, the finishers of the BMW BERLIN MARATHON run past the spectator stands to the finish line.

Five reasons to participate in the race in the German capital

1. The fastest marathon in the world

The BMW BERLIN-MARATHON is known to be the fastest marathon in the world. Twelve world records have been set during the 48 editions of this event. The latest one was set by Eliud Kipchoge in a breathtaking time of 2:01:09 hours. The reason for this flood of records is clearly the uniquely fast course. Compared to other marathons, the course is extremely flat, with many straight sections. In addition, Berlin in September is ideal for endurance sports. An average temperature of 15°C and favourable wind conditions ensure optimal conditions for the athletes.

2. Competing with the world's best

A 42.195 km course through one of the most historic cities in the world. When you run the marathon, you also get your very own sightseeing tour of the German capital at the same time. Passing the Victory Column via the "Strasse des 17. Juni", the route continues towards the main railway station. On the way to the Mitte district, the athletes leave the Reichstag and the Federal Chancellery behind them. One of the largest buildings in Europe, the Berlin TV Tower, awaits them there. The route then leads through the city's hippest districts, Neukölln and Kreuzberg. Through Schöneberg, Steglitz and Wilmersdorf, the route then heads back towards Tiergarten. An absolute highlight awaits you at the end of the course. The athletes run along the magnificent boulevard "Unter den Linden" through the Brandenburg Gate towards the finish, crossing the former inner-German border.

4. A place where dreams come true

One of Germany's biggest sporting events naturally attracts athletes from all over the world. Runners from 157 nations took part in the 48th BMW BERLIN-MARATHON. An important aspect for the marathon is the theme of diversity. The event is an opportunity for numerous athletes to achieve their individual goals. In addition to runners, many skaters, wheelchair athletes and hand cyclists also take part in the BMW BERLIN-MARATHON–and of course there are also races for the younger ones. In addition, there was a cooperation with Special Olympics Germany (SOD) in 2022, which included various inclusive participation options over shortened distances.

5. First the work, then the pleasure

A major sporting event also depends on spectators and fans. They also want to get their money's worth. There is always a diverse supporting programme around the marathon. More than 100 live bands and DJs will warm up spectators and athletes alike. You can listen to a wide variety of music, from samba and jazz to rock & roll and hip hop along the entire route. This means that the runners are supported throughout almost the entire course. For spectators who want to be active themselves, the route is ideal for accompanying the athletes. Those on bikes can get to 12 points along the route to cheer on their friends and family. The event is rounded off with an after-event party. There you can celebrate together with the world-class athletes.

Registration for the lottery for race entries for the BMW BERLIN-MARATHON 2023 is possible from September 29th to November 17th, 2022.

The Key Visual of the BMW BERLIN-MARATHON 2022